The Truth About Redheads

Did you know that being a red head is pretty rare? In fact, that it is estimated 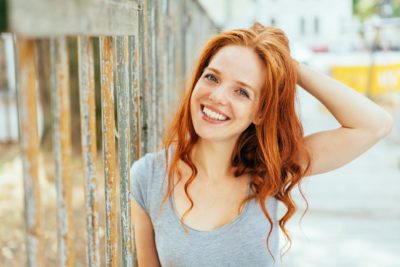 that less than 2 percent of the world’s population has red hair.

Whether you’re a natural redhead or get a little help from the salon, here are some red hair facts you might enjoy.

It’s in the genes. Red hair is caused by the mutant gene MC1R, which is responsible for pigmentation and how much or little melanin one might have. Melanin is further divided into two types, pheomelanin and eumelanin – the more pheomelanin, the higher the chances of blond or red hair, fair skin, and freckles. Also, you need two copies of the gene, but if both your parents are gene carriers yet do not have red hair, you still have a 25% chance of starting life as a redhead.

Superpowers. Fair skin doesn’t absorb vitamin D as well as other skin tones, so redheads adapted over time and now can produce their own vitamin D in low light conditions. What’s more, they are more sensitive to temperature changes. So, if you feel warm, chances are your redheaded friends feel warmer; if you’re cold, don’t complain, because no doubt they’re colder.

Rare occurrence. Today, natural redheads are seen in reduced frequency due in part to the cross-mating of people from different countries and continents. The largest concentration of natural redheads is in Northern Europe.

A strong hold. Red hair holds onto pigment better than any other hair color, making it more difficult to change colors. Still, if you’re bound and determined, your red hair will likely need to be bleached rather than dyed. Red hair also fades instead of going grey over time. If you have copper-toned hair, it will likely transition to strawberry blond and eventually a soft white.

A numbers game. Redheads have fewer strands of hair than brunettes or blonds. But what they lack in numbers, they gain in strand thickness, making their hair look fuller.

Redheads and eye color. Most redheads have hazel or brown eyes. If you have both red hair and blue eyes, consider yourself extra lucky; both are recessive genes, and only about 1% of the world’s population shares that gene combination.

Can redheads go bald? You bet they can, just like people of all other hair colors. If you’re among that unlucky group, do what friends and neighbors are doing, and contact DiStefano Hair Restoration Center today for a free consultation on how we can give you back a full head of hair – red, naturally.