The Effects of Smoking and Hair Loss 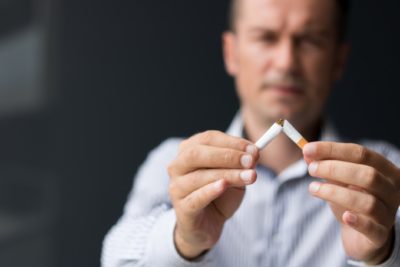 on one’s health and appearance. It causes lung, throat, and mouth cancer, prematurely ages your skin, stains your teeth, and has an odor that lingers long after the cigarette is done.

And now, studies show a link between smoking and premature graying and accelerated hair loss. A 2007 study conducted in Taiwan and published in the journal Archives of Dermatology found that men between the ages of 41 and 90 who smoked 20 or more cigarettes a day experienced increased hair thinning, even if there was no family history of male pattern baldness. In fact, the risk increased as the number of cigarettes smoked – along with the time spent smoking – increased. The study theorized that smoke damages the vessels at the bottom of hair follicles or damages the DNA of the follicles themselves.

Hair follicles, like any other organ, are affected by a variety of factors such as disease, medications, hormonal changes, diet, environmental toxins, and more. So, the health of your hair is largely dependent on how well you care for and nourish your body.

So, if you’ve been scratching your head while trying to figure out why you’re losing hair – while smoking a Marlboro or two – perhaps you’ve just discovered the reason why. Our advice? Put the pack down and pick up the phone today to schedule a free consultation with DiStefano Hair Restoration Center – we’ve been known to work wonders. Perhaps we can do the same for you.

Posted on September 10, 2020 by hairtransfer