The 7 Common Stages of Hair Loss

Hair transplant surgeons, doctors, and researchers use several classification systems to measure the extent of male pattern baldness. The most prevalent among them is the Norwood scale – or, the Hamilton-Norwood scale – first 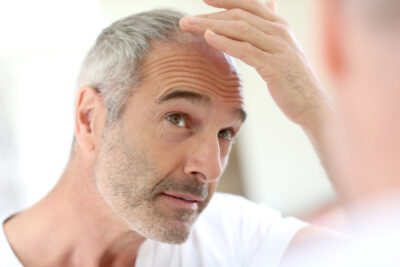 introduced by James Hamilton in the 1950s and revised by O’Tar Norwood in the 1970s. It measures the severity and pattern of male hair loss in 7 stages.

The least amount of hair loss at the hairline, thus make treatment unnecessary. However, if you have a family history of hair loss, you should monitor changes and discuss your options with a hair restoration specialist when you feel the time is right.

Slight recession of the hairline around the temples, often referred to as a “mature” hairline. A small amount of hair loss also can appear in the middle of the front head.

First signs of clinically significant balding appear, though still classified as small to moderate. The hairline becomes recessed at the temples in an M, U, or V shape. Hair loss in the crown area also can occur during this stage.

Hair recession appears more severe than in stage 2, with little to no hair on the vertex (or crown area). The areas of sparse-to-no-hair are separated by a band of hair that connects to remaining hair on the sides of the scalp.

The balding at the temporal and vertex regions are larger than in stage 4, and the band of hair between the hair loss areas is narrower and sparser.

From the hairline to the crown area, very little natural hair is present. The temporal balding areas join with the balding area at the crown.

The most severe stage of hair loss, with only a band of hair going around the sides of the head. Any remaining hair is usually not dense and may be fine.

A less common form of hair loss is called Norwood class A, where the hairline recedes uniformly from front to back. There is no “island” of hair in the middle and no bald area at the crown.

Where do you fall on this scale of 1 to 7, and how rapidly are you progressing from one to another? If you’re concerned about hair loss and want to restore all that you once had, contact DiStefano Hair Restoration Center today for a free initial consultation.