Hair loss can start at just about any age with men and women alike. Some will 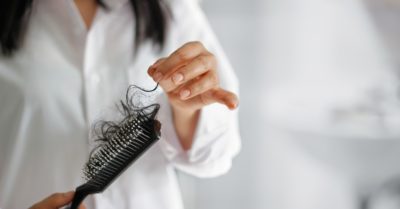 notice signs of hair loss as early as their late teens and early 20s, while others will continue to have a full head of hair well into their 60s. However, as a rule, the older one gets, the more likely he or she is to experience some form of hair thinning or loss. Regardless of age, there are several common signs of balding and notable differences between natural balding and other causes of hair loss.

Early Signs of Balding in Women

Natural balding takes on a characteristic pattern known as androgenetic alopecia, where genes passed down from generation to generation make one more or less likely to go bald.

For women, balding can begin as early as 12 years of age, after 40, or anywhere in between, and take on these common characteristics:

Early Signs of Balding in Men

Male baldness is also largely thought to be genetically determined. While it can start in men as young as 20, it most commonly occurs between the ages of 25 and 35, with the following signs:

Should I See a Doctor?

Balding is a natural process that affects many as they grow older. But if you notice sudden hair loss after a major physical or emotional life event, see your doctor for advice on treating what might prove to be underlying causes.

Some symptoms to note are:

Baldness can be tricky business, but no matter what may cause the process to begin, there’s one clear first step you should take: contact the hair loss medical team at DiStefano Hair Restoration Center for a free consultation. The sooner you act, the more likely we are to treat the problem to your complete satisfaction.